Background: Several fixation methods have been reported for the operative treatment of tibial eminence fractures. Previous biomechanical studies have demonstrated that suture fixation may be a stronger construct; however, the maturity status of these specimens was not scrutinized.

Purpose: To examine if suture fixation remains a biomechanically superior fixation method to screw fixation in both skeletally mature and immature specimens.

Methods: Sixteen total matched porcine (Yorkshire) knees (8 skeletally immature knees and 8 skeletally mature knees) were procured, and a standardized tibial eminence fracture was created. In each age-matched group of knees, 4 knees underwent randomization to fixation with 2 screws while 4 knees were randomized to fixation using a dual-suture technique. Once fixation was complete, the specimens underwent cyclic loading (200 cycles) in the anteroposterior plane of the tibia and load-to-failure testing, both with the knee positioned at 30° of flexion. Relevant measurements were recorded, and data were analyzed.

Clinical relevance: A stronger fixation construct may be beneficial and allow for earlier range of motion to help potentially decrease postoperative stiffness. Clinical studies are warranted to see if these results may be replicated in humans. 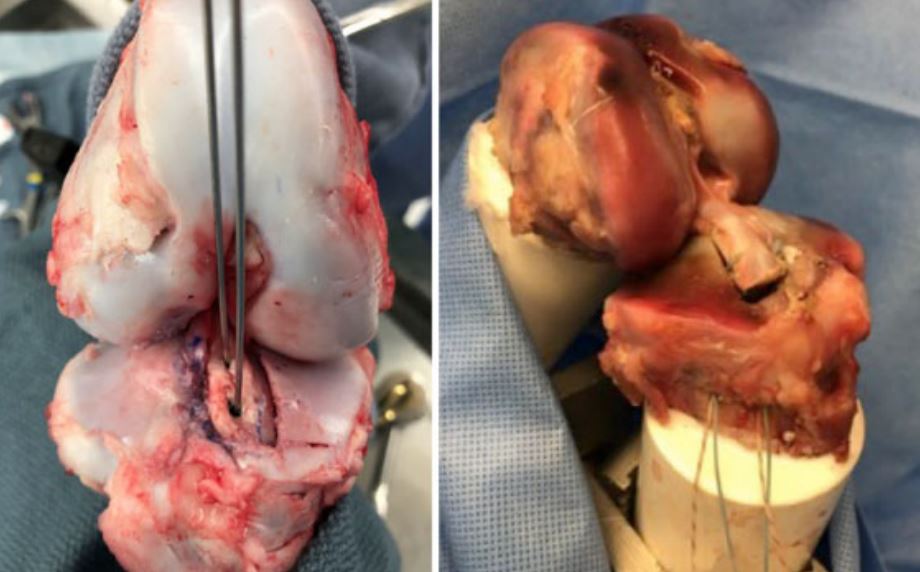